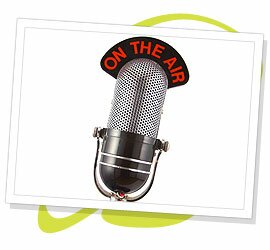 In early 2010 I started contributing to the 4FM weekly radio show, Anything Goes with Gareth with broadcasting legend Gareth OCallaghan. My segment The Hollywood Craic covers all the weeks best American celebrity gossip scoop. As a former contributing reporter for People magazine and TV Guide in Hollywood, I offer an insiders look into the often wacky, always insane world of U.S. celebrities!

While living in Drogheda, I contributed to The Late Lunch with host Gerry Kelly on LMFM. Every month I shared the ups and downs of adjusting to life in small-town Ireland.